Cogan Station, PA (September 2022) – C.H. Waltz Sons, Inc. is celebrating 75 years in business this year. “It’s a really exciting year for the company,” says Melissa Boehret, Marketing & Advertising Director. “We designed a 75th Year logo, had shirts printed and have incorporated the logo where we can. In the spring we had an anniversary picnic with pulled pork sandwiches, the works. It was a lot of work but also a lot of fun.”

75 Years is a huge milestone for C.H. Waltz Sons. The business is owned and operated by Deanna Boehret. Her grandfather, Clark H. Waltz, started the business on his farm in Cogan Station alongside his three sons. Eventually Deanna’s father, Ted Waltz, bought out his brothers. Ted still shows up every day to help where he can and talk to customers. “I’m thankful to carry on the tradition of my grandfather, father and uncles providing equipment and service to meet the needs of our community,” said Deanna about carrying on the company legacy. Deanna’s two sons have grown up in the business and have been employed for over 20 years. Seth is the Bloomsburg Manager and Sales Representative, you’ll hear his voice on the radio and see him in the TV ads. Justin (Gus) is a Service Technician and Sales Representative at the Cogan Station office. Both are involved in management and company planning.

In 75 years many things have changed at C.H. Waltz Sons, but some things still remain the same. The company has grown significantly over the past couple decades. There are now four full-service dealerships under the C.H. Waltz Sons name. The Cogan Station store took on a major expansion project in the 90s. Then in 2007 the second dealership opened in Dallas, PA followed by a Winfield, PA dealership in 2011 and the fourth dealership in 2016 in Bloomsburg, PA. “We provide the best equipment brands on the market but the thing that remains the same despite our growth is the personal touch we give our customers. We know many by name.  We know what they do, what they need and we take pride in excellent customer service”, said Deanna.

This year isn’t just a big milestone for C.H. Waltz Sons. Kubota (Kubota Tractor Corporation), their main equipment brand, is celebrating 50 years in business in the U.S.A. The Kubota brand was founded in the late 1800s in Japan but it wasn’t until 1972 that Kubota sold it’s first tractor in the United States. Since then, Kubota has expanded operation in the United States including corporate headquarters in Grapevine, Texas, several manufacturing and parts distribution factories and R&D facilities. “Kubota is a solid brand of tractors. They invest in new technologies, they give back to their communities, they’re eco-minded and they still believe in the dealership-customer relationship,” said Deanna, “We choose brands we can stand behind and who stand behind us. We are able to talk directly to top management at Kubota headquarters and share our customers’ concerns and problems. Changes have been made because of that relationship.”

To celebrate 50 years in business, Kubota produced a limited 50th anniversary line of tractors. C.H. Waltz Sons sold its 50th anniversary tractor, a Kubota L6060HSTC-50, this September to Steve and Andrea Kriner who own a farm in Montoursville. The tractor has a metallic orange finish, included a cab with heat, AC and radio and sold with a loader and a Landpride snow blade.  “I’m very excited for the cab with the radio. It’s nice to sit in. And the color is stunning,” said Andrea, who will be the tractor’s primary operator. She’ll use the tractor to maintain the farm and clear snow off their driveway.

The Kriners were excited to upgrade from their 39HP tractor to the 60 HP tractor. They originally came in to look at skid steers but fell in love with the L6060 when they saw it in the showroom. The Kriners purchased the tractor from Steve Heikes. Heikes has been with C.H. Waltz Sons for over 34 years. “He’s excellent, knowledgeable and follows through,” Said Steve Kriner about Heikes. The Kriners have done business with Heikes for many years now and are still planning to purchase that skid steer to add to their farm.

“Terry in service is great. We had a piece of equipment that needed some serious work and Terry went out of his way to fix it. He was able to get it covered under Kubota’s warranty program. We appreciate that Kubota stands behind that,” said the Kriners about C.H. Waltz Sons service department. The after-the-sale service has them coming back for their farm needs. Terry, Service & Rental Coordinator, has also been with C.H. Waltz Sons for along time, 17 years to be exact.

This fall be sure to stop by any of C.H. Waltz Sons four dealerships and look for them at the Bloomsburg Fair September 23 through October 1.   Their booth is extra large this year and can be found directly inside gate 5 along the fence. It’ll be packed with Kubota equipment and lots of great deals this year. Sales Representatives from all four dealerships will be there throughout the week.

To learn more about C.H. Waltz Sons and Kubota visit chwaltz.com and look for us on social media. 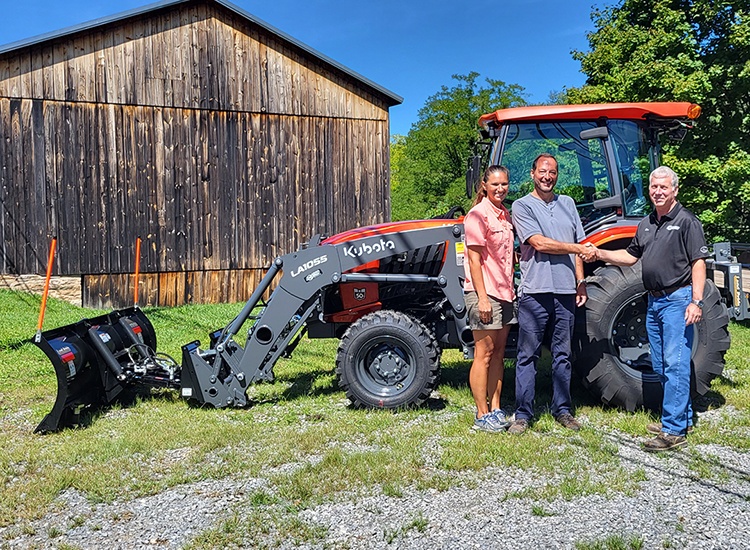 Your web browser is out of date.

Please download one of these free, up-to-date browsers for the best experience on our site